From EdFutures
Jump to: navigation, search

Chad Varah Primary School in Lincoln is a 4-11 primary school with 470 pupils, 20 teachers and 30 LSAs. Built in 1930, it was converted into its current form in 2008. Most pupils are White British with a below average proportion from minority ethnic backgrounds and an average proportion of EAL pupils. The proportion of disabled, SEN and FSM pupils is well above average. The school has mixed ability classes which are taught specifically to the needs of ability groups by level/sublevel to achieve accelerated progress.

Description of ICT infrastructure and resources[edit]

The school runs Windows Server 2003 on a Dell Server. They have 246 iPads, 38 XP desktop PC’s and 34 XP laptops. There is a fibre link between the cabinets to speed up access but the switches that link from the fibre to the school infrastructure are only running at 10/100mb. Cisco WiFi access points via 122 wired cat 5 access points provide full (unmanaged) wireless connectivity across school. Technical support is provided by the ICT SL and the full time resources manager who is tasked with managing low level technical problems. The council’s preferred provider provides remote technical support.

In May 2012, the school purchased 246 iPad 2’s from the Apple Education reseller based in North East Lincolnshire. 44 of these are used by teachers and LSAs and the remainder are shared out between classes for use by pupils.For the project the pupils had 1:1 access to an 16GB iPad 2 with internet access via the school WiFi. The pupils used a variety of apps including:

The school aims to get the majority of pupils to age-related expectations with an average of 6 points progress. In order for some children to achieve age-related they need to make 8 points progress. The aim of this project was to investigate if 1:1 computing via the iPads would support the children in making accelerated progress. The project involved four Year 3 pupils who need to make accelerated progress. The project was managed by the Year 3 teacher and a first year GTP student who is based in the class as part of their training. The GTP teaches 40% of the class literacy and numeracy timetable. The teacher and the GTP looked at their planning for the two weeks and decided where the iPads could be used. Some of these planned activities involved other adults in the classroom such as the class LSAs and other student teachers and they were briefed on how to support the pupils with their devices. The observed sessions both took place in literacy lessons with the specific aims as follows:

Session 1: word level work focused on ‘igh’words. The children used an app on their iPads called Mr Phonics – Letters and Sounds: There were 6 in the group and each pupil was paired with another child that did not have their own iPad (one of the pupil key users was in a different group for this activity). The expectation was that the children would share their iPad and work together during the activity. They were asked to watch a video about ‘igh’ words and then to create a word wall for words with ‘igh’ in them. 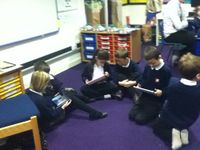 Session 2: Guided reading / being able to discuss what they like / dislike about books. Each child took it in turns to read to the rest of the group whilst the other children followed the story. The pupil key users were asked to take notes on their iPads about the things they liked / disliked in the book. 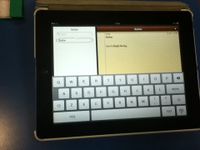 iPad as a tool for accelerated learning.

Pupils From the children’s perspective, iPads make their lessons better ‘It was more interesting and exciting’ and ‘Everyone loves iPads that’s why they brought them in’. They also thought that having them in school improved the school’s reputation ‘So it can be a better school and more people can come in and learn more’. They said that ‘All staff use their iPads – it’s good coz they can get more information into their brains as well’ but were not very impressed that staff are able to take their iPads home whereas children are not ‘I would like to use them in more lessons and take them home’.

Staff felt that this project was limited because ‘Our class should have access to 1:1 compared with another class that does not. There are a lot of confounding factors here. Having something special to themselves did cause an issue’ also ‘the logs sheets for the kids, that is ending up as a possible confounding factor because they are reflecting on their learning. If it was 1:1 in a realistic situation whether they would have that….. Pupil refection is important to measure impact but this is time consuming’. Staff see the need to repeat the research after the children have had focused ICT lessons on the apps used during this project so that they can begin to challenge some of the issues identified. The school now has an understanding that pupils require little in the way of discrete skills to use the skill and drill apps because they are game-like but the use of the more creative apps requires learning new skills. The children also recognised this ‘They don’t really teach us how to use the iPads’ and ‘We think they need to teach us how to use the iPads’. A renewed confidence that 1:1 iPads would work ‘because of their portability, ease of use and that children were limited if they did not have access to the technology.